“We’re constantly looking at ways to tweak and adapt – whether in a Covid world or non-Covid world. And while Covid has brought a great deal of uncertainty for businesses, at Honest Kitchen we looked to adapt and grow by creating a new role for business development and marketing to reach more customers online,” said Karen.

“The biggest challenge for us has been the direct impact on the cost of goods, especially meat and dairy. We’ve worked incredibly hard to absorb those costs internally but ultimately for us to survive as a business we have had to increase prices. Fortunately, our local community has been very understanding.”

As well building a strong rapport with locals, Honest Kitchen’s online marketing efforts have also helped them gain customers from outside Whanganui.

“Back in December we had a couple drive up from Wellington specifically to taste our smoked salmon, after learning about us on Instagram. Since then they’ve returned several times. We’re also increasingly getting people driving from Taranaki to Wellington make a point of stopping in Whanganui to visit Honest Kitchen. We’ve also a number of people based in Australia ordering meals online for friends and whanau here in Whanganui.”

Cathy-Lee says Covid has been a real challenge, “especially since we only brought Pita Pit in November 2019 – so we were very new to the business world when we went into our first look down.”

Despite the challenging times, Pita Pit have had great local support and were also in a strong position to provide contactless takeaway service – as well as deliveries through local company Food Runners. Consequently, they went on to be recognised as New Zealand’s top performing franchise for 2021.

Jason says it was great to receive recognition for their team’s hard work and the growth their business has enjoyed. But like many businesses in our city, they’re now starting to feel the pinch with arrival of omicron.

“Since the first cases were announced here in Whanganui, we’ve seen a steep drop-off of people going out and about – which is obviously having a significant impact on hospitality businesses.

“Fortunately, we’ve been lucky enough to be an approved supplier for the Ka Ora, Ka Ako Healthy School Lunch programme, providing over 100,000 lunches to local children. This has become a core part of our business and has helped us immensely during this very trying time.”

Cathy-Lee feels a lot of empathy for other hospitality businesses around town, especially those who haven’t enjoyed the same relative advantages.

“I think it’s important that our community understands how challenging this situation is for businesses. Government support can only go so far. So I’d urge people, if they can, to get out and support their local cafes and restaurants. They’re taking all the measures they can to ensure your health and safety and they need your support more than ever.” 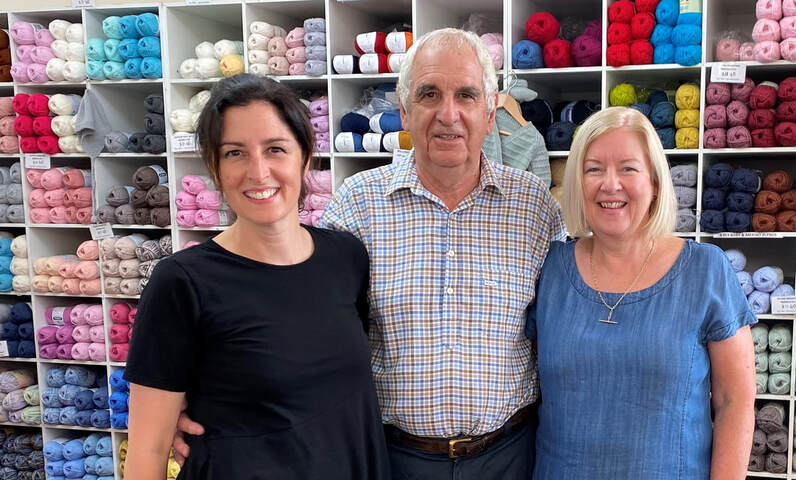 Amanda Spooner (pictured with her parents John and Gay) has transformed Garney Spooner into one of New Zealand's top wool shops.
​Garney Spooner has been a mainstay in Whanganui for 90 years now. First established as a dry-cleaning business in 1931, the family-owned enterprise is still going strong on Guyton Street. However, with the fourth generation of Spooners (Amanda) now at the helm, it’s no longer
​dry-cleaning they’re known for. Instead they're now one of New Zealand’s finest purveyors of wools.

When Amanda’s great grandfather Garney first set up the business, dry-cleaning was a big deal. Back then most garments were made from natural fibres that couldn’t be machine-washed, so there was a huge market for dry cleaning. But as the 20th century progressed, natural fibres like wool were increasingly replaced by machine wash-friendly synthetic fibres like polyester and the market for dry-cleaning gradually declined.
​
It was perhaps ironic that when Amanda’s parents John and Gay decided to diversify their business in 1988, it was a wool shop they chose to open alongside their dry cleaning business.  “To be fair, wool wasn’t a huge part of the business back then,” said John. “Dry cleaning was still our bread and butter, and the wool shop was an extra”. 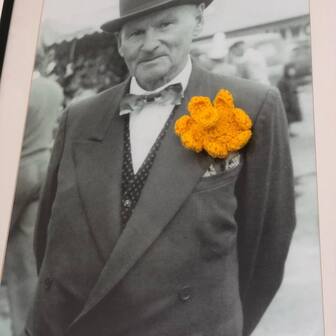 Garney Spooner founded the business in 1931.
27 years later, in 2015, John was on the verge of retirement and decided to sell the dry cleaning business not knowing what to do with the wool side of the business. Out of the blue Amanda suggested that she would like to take the business over. Taking the reins with help from her parents, Garney Spooner Woolshop has grown into one of New Zealand’s top wool shops with a carefully curated range of over 150 lines and 1200 colours.

Amanda credits the secret to the shop’s success is building genuine friendships with the local knitting community.  “Using social media has been a big part of that.  I’m very grateful that our customers share posts and interact with our page, this has really helped”.
​
I have kept the monthly instore $50 voucher draw for any wool purchase. “That works two ways creating a nice incentive to keep shopping here, and more importantly it also helps me learn our customers name so I can personalise the service I provide.”  Her dad agrees that the personal touch is a big part of her success.  “Back when I was running the business, we’d have people coming in for 30 years, and I’d always known them as Mrs Smith. Now I’ll see the same lady come in and Amanda will say ‘hello Mary how are you!’”

Amanda has also always made sure to keep catering for knitters of all means. “We stock high-end luxury blends but it’s also important to have good quality wools for hobby knitters or those knitting for charities”.

“I’ve discovered since running the business is that there are many knitters & crocheters who use their skills to create woollen items to support people in need. It’s very heart-warming to see how much kindness and generosity there is in the Whanganui community”

As well as helping others it is well known that people who do handcrafts can gain a lot of therapeutic benefits. “These days so many people are addicted to devices. Having a creative hobby like knitting or crochet that requires both your hands to be doing something positive (rather that mindlessly scrolling your phone screen) is a great way to relax and unwind.”

Garney Spooner Wool Shop is located at 93 Guyton Street. They also have a wide range of specialty yarns available online at garneyspoonerwool.co.nz
When Lesley first established Paige’s back in 2004, it was a fledging business run from her home. But in 2006 she took the plunge to establish a physical bookstore in a heritage building on Guyton Street.

Back then, the idea of establishing a specialised, boutique bookstore in Whanganui might well have been ridiculed by many. Whanganui then was often derided by the media as a cultural backwater – and at one point was even labelled a ‘zombie town’ (due to its shrinking population).

But clearly Lesley recognised something about Whanganui that many others didn’t.
“We always believed our little city by the Awa had huge untapped potential with its rugged natural beauty, magnificent heritage buildings, and the genuine sense of community here. So we knew it was only a matter of time before unprecedented growth occurred.”

With Whanganui’s phoenix like rise in recent years – its growing population and economy, its thriving arts scene and the steady stream of accolades being bestowed upon the city – Lesley’s vision has proven prescient.
While Paige’s caters for many niche audiences with highly specialised literature, it’s far from an ivory tower. Instead Lesley and her team believe it’s important to have an inclusive atmosphere that fosters a love of reading in people of all ages and backgrounds.

“Our philosophy is that it’s essential to immerse young people in books, starting with babies, and from that basis, there’s a strong chance the love of literature in its many forms, will follow people through their lives,” says Lesley.
The success of Paige’s has seen Lesley, who is also a talented illustrator, establish another business adjoining the bookstore called Lockett Gallery.

“Lockett is unique in Aotearoa as no other gallery primarily celebrates published illustrators. As we all know, illustration is an integral aspect of the book industry. What’s more, we’ve also established a small publishing company, Lucy Lockett’s Pocket, which is in the throes of expansion.”

Given Lesley’s passion for her city, illustration and encouraging children to read, it’s fitting that their first in-house publication, Beautiful Whanganui, is a board book for babies that celebrates New Zealand’s most beautiful little city with beautiful black and white illustrations.
​
Paige’s Book Gallery and Lockett Gallery are a much-loved and integral part of the wider Whanganui community. Lesley and her friendly team welcome anyone who is visiting the area. To learn more about Paige's, click here.